Learning the Strength of Love from a Wasp Sting

During college, I spent some time in the northern mountains of Thailand studying the local indigenous cultures.

During the day we would hike about 9 hours from one village to the next, stopping for the night and acquainting ourselves with the locals as well as we could with our mediocre Thai language skills.

One day, hiking to the next village, I saw a plastic wrapper and picked it up to throw it away.

I suddenly felt a searing pain in my middle finger, and looked around to see what caused it. I saw a huge orange wasp buzz away.

My finger started to swell and soon my entire hand was consumed in pain, to the point that I could no longer hold my walking stick.

The following day, I was playing takra (like volleyball with your feet), when I saw a similar wasp come down and buzz around. My heart started beating faster, as to my horror it came right towards me.

It nestled between my watch band and wrist, and as I tried to swat it away, it stung me. It took flight and buzzed aggressively around me, while I fled in a mixture of terror and hatred.

My friends suggested that perhaps it was attracted by the lively colored sarong I wore, which I tore off, now sprinting around the town in my underwear! It must have been quite a scene, and became somewhat of a running joke. My entire arm swelled up so much that it looked like I was wearing a glove.

On the last day of the trip, we were in a group setting, and I was working on being aware of my surroundings. Suddenly, another orange wasp came towards me and started buzzing aggressively. 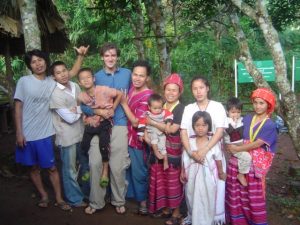 “Look, your friend!” my classmates jeered. I watched the fear and hatred begin to bubble up within me, and applied the technique for eliminating the egos that I had learned from Belsebuub’s work.

Suddenly, this odd clarity appeared within, as I observed the wasp with total detachment, and then the funniest thing happened: I felt a sense of love for this wasp, as if it were a great friend.

In a strange way, I felt this love protected me, making me feel as though I could have held and petted the wasp and it wouldn’t hurt me. As it was, I just watched it buzz back and forth, and presumably sensing no threat, it flew away.

It gave me a taste of the strength and stability that love can give, even in situations where you would think the best choice is to run.